Students at Manual Arts High School got to step outside of the classroom this week and see their college center quad transformed.

Students at Manual Arts High School got to step outside of the classroom this week and see their college center quad transformed. For one morning, on September 20th, the Getty Foundation and the LA Promise Fund set up an outpost of Pacific Standard Time: LA/LA (PST: LA/LA) to announce the opening of the Student Arts Contest.

The contest asks students to respond in a work of art to the prompt, “LA is _______. Am I LA?” During the morning’s activities, students were invited to consider how they would fill in the blank and how they could show that idea in their art.

Senior Kimberly Gonzalez saw the event as a chance for students at Manual to challenge the way their communities are often perceived. “People think that if you’re from South Central, you must be a gangbanger. They say, ‘Graffitti—is that the only art you have?’ People in the outside world don’t realize we have special talents.”

Students rotated through seven stations, beginning to think about possible entries in the Student Arts Contest while exploring different artistic media. Inside a trailer dubbed PST-Mobile, students enjoyed a break from normal school rules: they got out their phones and used SnapChat to get a virtual sneak peek at some of the Latinx art on display in museums across Los Angeles. That’s not a replacement for seeing the exhibits in person, of course, and later in the year the LA Promise Fund and the Getty will work with Manual Arts and other LA schools to organize field trips for students and families.

On the walls of the trailer, Getty staff helped students arrange magnets to complete the sentence “There will be …” Perhaps inspired by the Hammer Museum’s Radical Women: Latin American Art, 1960–1985, one group wrote, “There will be… angry chaos sisters.” A few other entries: “millions of voices and opinions,” “athletes for America,” and “happy girl.”

The rest of stations were run by partners the LA Promise Fund has brought to Manual—organizations that have a presence on campus every day of the week.

Band director Romeo Vera and guest Gerson Reyes—a former LAUSD teacher as well as a professional musician and drumming instructor—organized a drum circle, where students made a rhythm for the crowd around them.

The tutoring and writing organization 826 LA is mostly busy at this time of year helping Manual Arts seniors craft their personal statements—but 826 LA staff took a break to offer a station where students could write “I Am” poems. Students used the poems to reflect on the forces of community that have shaped them. And they expressed their own individual identities and futures, as senior Rashell Santos did, writing, “I am una señorita con inteligencia, con una futura adelante.”

On a huge canvas draped over the back fence, students spray-painted their answers to “LA is _____.” The materials were provided by Woodcraft Rangers, which offers after school programs for students. Three words kept coming up: home, hope, and family. After a few hours, the words became lost in a mix of colors. Darryl, overseeing the event for Woodcraft Rangers, thought students kept coming up because “they’re still contributing.” He added, “This is as LA as it gets. People are told graffiti is negative, from a young age. So here they can see it positively.”

The LA Promise Fund staff, who can normally be found working in the college center, offering college counseling and internship/mentorship access, taught students about the rule of thirds in photography, helped students sketch a rough draft of a collage, and gave out cards featuring images from PST exhibits to build into towers and sculptures—“I’m going to take them home and put them on my wall!” said junior Dafne Hernandez.

Yessenia Cux, a junior just starting her second year at Manual Arts, sketched a collage juxtaposing a globe and images of people from a variety of cultures. Yessenia loved the idea of a collage, because, she said, “You can have two points of view and connect them.” But she wouldn’t say it was her favorite activity: “I liked everything!”

Peter Horton, the LA Promise Fund School Workforce Coordinator, works to support students at Manual Arts by connecting them with mentorships, internships, and extracurricular programs, including The Intern Project and Girls Build LA. 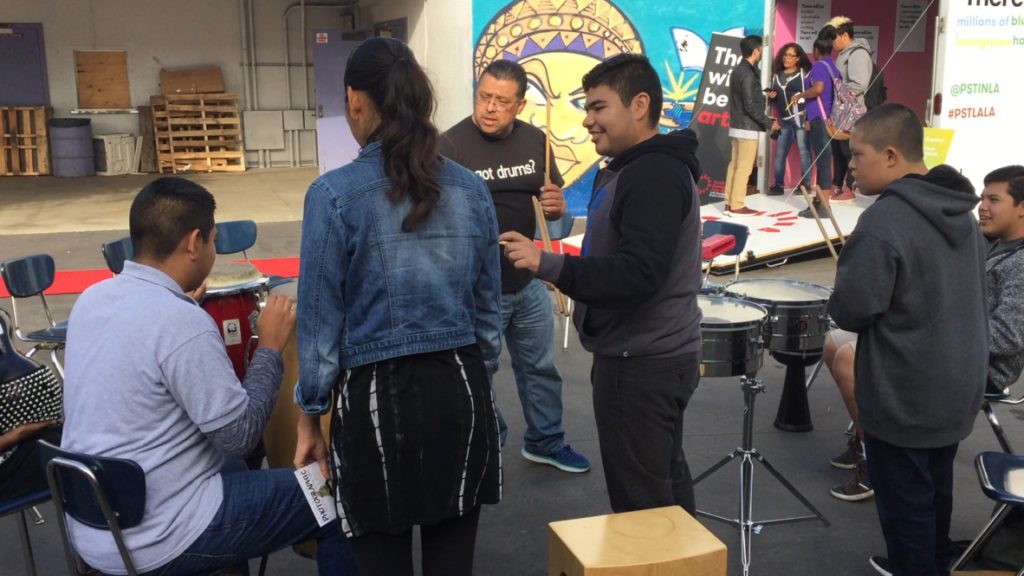